Back on track: Lessons from ultra-runner Michael Stocks 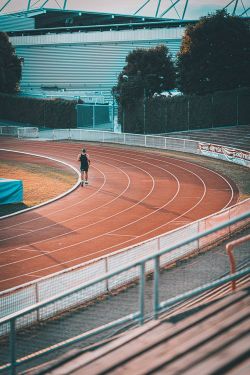 In 2019, former corporate lawyer, entrepreneur and The Supper Club member Michael Stocks was selected to run in the 24-Hour World Championships. At 50, he was the oldest athlete ever to make their debut for Great Britain. The author of One Track Mind reveals the mental tools that make it possible to run six marathons in a single day.

On taking it one step at a time:

Up until my early thirties, I was a smoker. I drank a lot. I didn’t wake up one day and suddenly think, “I’m going to run 150 miles.” It was a very gradual process. When I ran 5k for the first time, I couldn’t see beyond 10k. A marathon seemed like an impossibility, until I stood at the finish of my first half marathon. If a runner says, “I could never run an ultramarathon,” I would say: “Then don’t try it tomorrow, but don’t rule it out forever.” You can do amazing things if you just take it one step at a time.

On having your mind on your side:

In ultra running, as with many other sports, you get the crap kicked out of you mentally and physically. That negative voice in your brain tells you to stop, to give up; it tells you that you’re not good enough. You have to prepare for it and learn to control it. I worked with a coach who helped me to visualise, as clearly as possible, the setting of the race and how I’d feel at different points, so that negative voice wouldn’t take me by surprise. I was ready with a counter voice that said, “I can handle this. I want to be here. I will keep going.” The power of the mind is incredible. That’s what gets me to the finish line.

For a 24-hour race, I prepare “crew notes” for my team – the people at the side of the track who are looking after me. I make sure they understand not just the practical stuff, like what I need to eat and drink throughout the race, but also my mental state. I may vomit. I may be exhausted. I may be distressed and in pain. But unless my life is in danger, I will not leave that track. I am 100% determined to finish the race. Ultimately, your performance depends on total commitment.

As well as being an athlete, I’m also a writer, speaker and entrepreneur. My life isn’t just about running so I do have to manage my time really carefully to balance things. I’ll do a long run on a Saturday, so I have recovered in time for Monday. I’ll make sure I don’t have a tough speed session the night before a sales pitch. I’ll run to meetings and carry a change of lightweight clothes with me. Luckily, it’s part of my brand to arrive red-faced with sweat pouring down me!

The world of ultra running is full of incredible people. Take Geoff Oliver, for example. He ran 77 miles in 24 hours – at the age of 85. Or 78-year-old Patricia Seabrook who ran 74 miles. It’s not just the athletes who run the furthest or the fastest who are the most remarkable.

In 2019, I was selected to run for Great Britain at the 24-Hour World Championships in Albi, France. It was a dream come true. You have a squad of six men and six women, and the top three runners from each team count towards the overall score. When I first applied to be part of Team GB, I was desperate to be one of the three male “scorers”. I wanted to be the best. But once I was out there running the race, I realised that it’s not about beating everyone else. It’s about being part of a team and raising each other’s game. If three other guys do better than me, that’s fine because then the whole squad wins medals. Ultimately, their success is my success, too.

I meticulously plan all the things I believe I can control when I’m on the track. But there are always people who are better prepared than me; they’ve thought of that little something that would have made my life easier or made my performance better. So I learn from them and take notes. For every race, I should be better prepared than the one before.