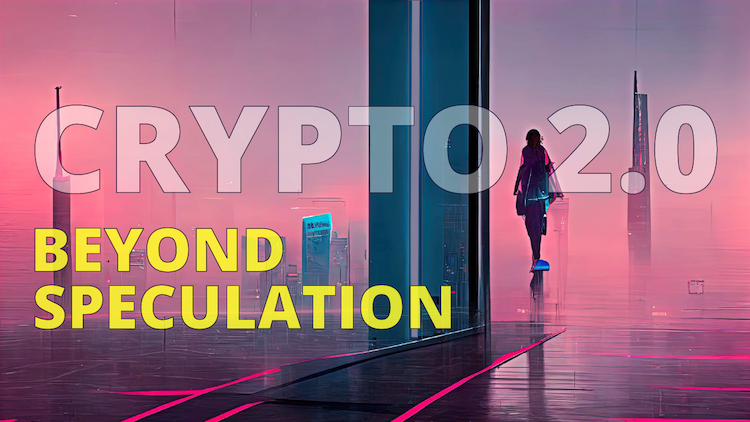 It's been a curious year in so many ways. From the outbreak of war in Europe, to the revolving door at Number 10. But spare a thought for anyone with an interest in crypto. While non-crypto people receive the news of each exchange collapse or crypto fraud with a smug mutter of "caveat emptor" (buyer beware), the events in 2022 may have lasting implications for us all.

A series of dramatic and catastrophic events, culminating in the collapse of FTX, took us swiftly through a crisp "crypto winter", straight into an apparent "cryptogeddon". And the numbers are eye-watering, with an estimated $2 trillion of lost value for investors. No wonder the Bank of England thinks now is the time for a spot more regulation (of which more later).

But, amid all the carnage, there remain a defiant few who take a more positive, long-term view of the crypto universe. They point to the value in some of the underlying technology and the meaningful change it could bring to markets over the long term.
‍

Helm is a community of like-minded founders of high-growth scale-ups. Earlier this month members heard from fellow member and all-round crypto nerd Phil Blows on this very topic. The co-founder of AQRU, Phil is definitely one of the faithful. He comes from a long career in traditional finance and sets his stall out as attempting to bridge the gap between traditional finance and decentralised finance.

Phil presented an honest assessment of where the market had gone wrong to date and offered an interesting picture of some of the opportunities latent in what he refers to as "crypto 2.0".

Forgetting lessons of the past

The key lesson in what’s gone wrong, he suggested, is that too many people in the crypto sphere have allowed themselves to ignore some basics and have therefore repeated many mistakes from the past that should have been learned from previous market failures.
‍

He highlighted the poorly constructed economics – a lesson that anyone with a long-enough memory would have learned from the 1997 Long Term Capital Management (LTCM) crisis. Likewise there has been both poor liquidity management and excessive risk taking, lessons the 2007/8 financial crisis laid out for everyone to see.
‍

The real problem is that no one has really settled on a meaningful use case for crypto other than as a fairly unreliable store of value. This is a similar argument to that made by esteemed Wharton professor Kevin Werbach in his book The Blockchain and the New Architecture of Trust. In that book, Werbach writes:

“The absence of scaled use cases beyond financial speculation is a huge issue. The Web3 argument is that all that capital is borrowing against future cashflows, to overcome the network effects of incumbency. However, that still presupposes that there is a pony in there, under a reasonable time horizon. That claim becomes less convincing over time without successful examples.”

The lessons from what has gone wrong to date with crypto - and it's hard to argue after the loss of $3trn that some things haven't gone wrong - are that to succeed, any new crypto platform has to offer full transparency, be run by experienced and trusted people and look to a more decentralised lending model.

‍
The future is hybrid

What Phil is suggesting is essentially a hybrid model. Remember that idea of bridging the gap between traditional and decentralised finance? In this model, the good parts of crypto are brought together with some greater controls and other elements of traditional finance. It at this junction where Phil sees “tradfi merging with blockchain”. And this is where he thinks valuable and trusted use cases will soon begin to emerge.

As the two worlds begin to rub against each other more frequently, so the regulatory landscape will also begin to shift and will eventually settle down. At the moment all around the world financial regulators are scrambling somewhat as they pick up the pieces from collapses over here and massive-scale financial fraud over there. There remain some important issues to be settled, not least whether crypto assets should be considered as securities or not and regulated accordingly.

Unlike many, clambering to escape the clutches of regulators, Phil says settling some of these issues and getting the regulatory frameworks that are tight enough to offer piece of mind, but flexible and agile enough to evolve with the next wave of crypto innovation would attract more funding, more consumers and smarter, new applications to the market.

After another crypto winter and a cryptogeddon, it's time for the world of crypto to grow up. We need a crypto coming of age.